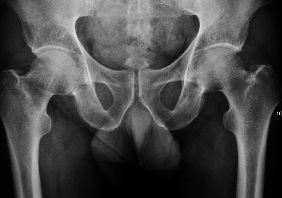 Hip pain is becoming increasingly common. There are a wide number of conditions that can cause hip pain, however they all share certain similarities. Regardless of the underlying cause, hip pain can limit someone’s ability to enjoy life in general. Hip pain is generally exacerbated by walking and other upright activities, pushing people to become increasingly sedentary.

As people begin to move less due to the limitations of their pain, the hip can begin to degenerate. This process generally involves changes to the cartilage within the joint and if left unchecked, can even result in remodeling of the bones.

The hip is a ball-and-socket type joint where the head of the femur meets the pelvis. Due to its location attaching to our pelvis, which is the foundation of our spine, hip issues can be severely debilitating. Virtually any movement of the lower body will transmit force through the hip joint. It is for this reason that hip pain can have such a dramatic limiting effect on one’s physical activity.

So what is done to help with hip pain?

Osteoarthritis of the hip (a result of degeneration) is often addressed with glucosamine and chondroitin sulfate or a similar combination of supplements aimed at reducing the destruction of cartilage inside the joint. While this can slow the degenerative process in certain cases, it often does little in terms of symptomatic relief. These supplements are also limited in their ability to actually rebuild cartilage that has already been lost.

Hip replacement surgery has become increasingly prevalent. According to the National Center for Health Statistics (a part of the CDC), “the annual number of total hip replacements among inpatients aged 45 and over more than doubled between 2000 and 2010, from138,700 in 2000 to 310,800 in 2010”. In the same nationally published report, the rate of total hip replacement more than doubled for those aged 45–54 over the 11 years from 2000 through 2010, from 45 to 117 total hip replacements per 100,000 population.[1] While this rate was still found to be lower than that in the elderly population, it represents a dramatic rise in relatively younger patients receiving this operation. The report continues on, “…the younger ages at which total hip replacements are performed may result in a greater number of procedures being done to replace artificial hip joints that have worn out over time”. The hardware used in joint replacement surgery has certain limitations including that they all wear out over time. Another concerning aspect of younger patients receiving this surgery is that it is irreversible, and the results often leave much to be desired.

In 2014, an article was published in the scientific journal Hip & Pelvis which outlined some of the complications associated with hip replacement surgery.[2] The article stated that “the postoperative death rate has been steadily increasing.” The author continues to report that this is due, at least in part, to an increasing amount of aging patients reporting to hospitals with hip fractures. Regardless of that, this trend of increasing deaths following hip surgery should be cause for concern and a re-examination of how we approach treating hip pain.

To gain an understanding for how important healthy hips are for healthy aging, consider research published in the journal Bone and Joint Research in 2017. The study reported that 30% of hip fracture patients die within one year of the injury. Even further, 7% of hip fracture patients die within 30 days of being admitted to the hospital.[3]  Another article published in 2010 in the Archives of Physical Medicine and Rehabilitation tracked the limitations reported by hip osteoarthritis patients over 3 years, monitoring the condition at various checkpoints.[4] At just 1 year follow-up, patients reported the following issues:

Additionally, it was found that patients who suffered from one or more of the previous issues had significantly increased odds of progressing self-reported limitations. This indicates that as the degeneration of the hip continues, health in general tends to decline as well. This can be attributed to the decreased activity level compounded by prescription drugs (opioids, anti-inflammatories, etc.) that bring along a large list of negative side effects.

Given the severe and progressive nature of the comorbidities associated with hip pain, as well as the gravity of risks associated with current surgical protocols, it is abundantly clear that safer and more effective treatment methods are needed. Often when that is the case, a shift in thinking is needed to generate novel and creative approaches to improve patient outcomes.

What if there was a way to regenerate cartilage in an osteoarthritic hip? If the current approach is to replace the damaged tissue with artificial material that wears over time, why not consider if we can increase the body’s natural healing properties? What if this approach was safer than surgery and a fraction of the cost?

Recent advances in stem cell products has provided the answer to each of these questions. Mesenchymal stem/stromal cells (MSC’s) have been discovered to be a key component in the healing process. When there is damage in our bodies, the damaged cells release chemical messengers which initiate the mobilization of various healing factors. This is also known as the inflammatory process.

MSC’s play a large role in the inflammatory process by utilizing their unique ability to differentiate into various tissue types. In the hip joint for example, there are multiple types of tissues/cells that can be injured; cartilage, tendon, bone, etc. When MSC’s are mobilized into the injured hip, they transform/differentiate themselves into whatever type of cell is the most needed.[5]

MSC’s exist in our body naturally at high levels when we are born and decrease rapidly as we age. Not only does the number of these cells decline, but their functionality declines as well.[6]

“Ageing is accompanied by a progressive decline in stem cell function, resulting in less effective tissue homeostasis and repair.”[7]

Scientists have identified a number of characteristics of aging stem cells: failure of self-renewal, decline in ability to both send and receive cellular signals, abnormal differentiation, increased cell death.[8]

This recent evidence of a decline in stem cell function with age has led to the discovery of a new, rich source of MSC’s: the human umbilical cord. The umbilical cord is the highway where nutrients and blood flow are shared between a pregnant mother and her infant baby. After the birthing process, the umbilical cord is discarded in most cases.

Recent publishings in scientific literature have re-examined the idea of the umbilical cord as useless once the baby is born. With the recent stem cell boom, there is a race to discover novel and better ways to cultivate MSCs. A specific part of the cord known as Wharton’s jelly was found to be a very rich source of these powerful cells. Wharton’s jelly is a gelatinous matrix that surrounds the main blood vessels of the umbilical cord. Through state of the art culture techniques as well as exhaustive quality testing, it was found that this jelly yielded a very high concentration of super potent MSC’s.[9]

One of the main advantages of umbilical cord derived MSCs is that they are brand new cells. Autologous derived stem cells (those either extracted from a patient’s own bone marrow or fat tissue) are exactly the same age as the patient. These autologous stem cells have shown less ability to divide and replicate themselves. In contrast, umbilical derived stem cells represent the newer and more effective populations of MSCs.

As with any medical breakthrough, there is a large amount of misinformation and it can be difficult to be 100% sure of the claims made by providers. I urge you not to take my word for it, but to check out the website of the company that provides our product (https://www.predictivebiotech.com/). On the website you will find educational resources, medical research, and FAQ’s.

To learn more about how stem cells can change you life, attend one of our FREE Boulder/Denver group consultations or call our office at (303) 882-8447 to setup an appointment with one of our doctors. You owe it to yourself and those who care about you to stop letting pain rob the joy from your life. You are worth it!

Resources About Your Health

Click the link below to begin the process of finding relief and we'll be in touch shortly. Start Today